Rising Hope is where love and support for addiction rises. Find out how to create healthy relationships with addicts and understand the true struggles of addiction in one place. 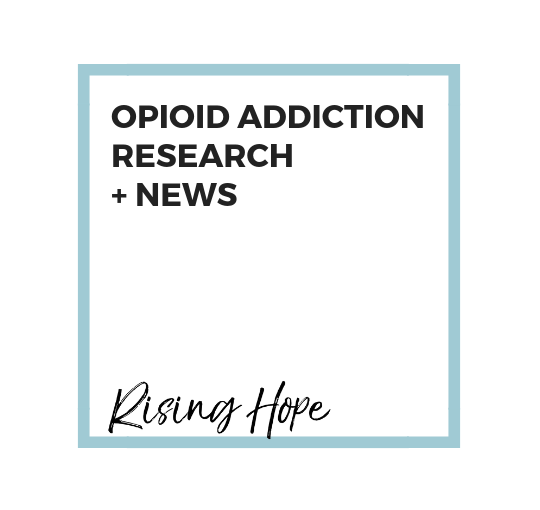 Since I subscribe to news and updates on opioid addiction research and events, I’ll be using my blog to share them with my readers as well. I only publish one blog post per month but each day I’ll update the post with new articles and events. I will keep this as unbiased as possible while summarizing the articles. Rising Hope is a safe place for discussions and talking about experiences with addiction. We are not research based and all information below is not associated with our beliefs. We’ll provide the article, a short summary, and discussion questions and ideas in italics.

An estimated 100 people per day die from drug overdose, a figure that has tripled in the past 2 decades. Addiction is a complex topic, involving interplay between neuroscience, psychology, and sociology. Erin Calipari, a researcher at the Vanderbilt Center for Addiction Research in Nashville, TN, and team showed that by manipulating G-CSF levels, they could alter motivation for cocaine without changing motivation toward other rewards.From this, they concluded that G-CSF might be useful in understanding — and perhaps even intervening in — addiction. G-CSF is a protein that the immune system produces that can affect changes in other cells — and is known to influence motivation and decision-making. This is FDA approved and Calipari is now working with Drew Kiraly at the Icahn School of Medicine at Mount Sinai in New York City to bring this to human trials.
Research on a protein is showing that using the immune system can be influencing cravings and Calipari is on a mission to get this kind of targeted addiction treatment to human testing. Are cravings only one part of addiction and if so what would this mean for addiction if the cravings could stop?

The Illinois legislature has become the first state to give doctors the ability to prescribe marijuana instead of opiates in an effort to fight the opioid epidemic, with other states looking to follow. “If you look at states that allow medical cannabis, there are fewer people dying from opioid overdoses,” said Chris Lindsey, the senior legal counsel for the Marijuana Policy Project. “And it’s a significant number.” “This is a harm reduction strategy,” Hockenberry said. “It allows patients to substitute one drug for another that is causing severe harm. By substituting marijuana, we’re trying to reduce opioid overdose deaths.”
Do you believe other states will follow Illinois?

Trends and Predictors of Mortality for US Opioid Overdoses from 2003 to 2014 by Clinical Pain Advisor.
The following information is part of conference coverage from the IASP 2018 conference in Boston, Massachusetts.

City of Boston sues drugmakers over opioid epidemic by BizJournals

The city, along with the Boston Public Health Commission and the Boston Housing Authority, filed a complaint in Suffolk County Superior Court Thursday afternoon against several drugmakers, including Purdue Pharma LP, Johnson & Johnson (NYSE: JNJ), and Insys Therapeutics Inc. (Nasdaq: INSY). Boston Mayor Martin Walsh announced the lawsuit at a press conference.”This lawsuit is not about money. It’s about lives,” said Walsh as, just steps away, a man moved from his spot sleeping against the shelter. “This lawsuit is about ending the problems we have and people acknowledging what they did wrong.”

What will come from the lawsuit?

Depression May Partially Mediate the Relationship Between PTSD and Opioid Misuse by Clinical Pain Advisory.

A health survey was administered to patients filling opioid prescriptions at 4 community pharmacies. 16% reported misusing opioid medications, of whom 33% and 29% were diagnosed with PTSD and depression, respectively.

How has depression played a part in your loved ones opioid addiction?

A play coming to Northeast Ohio is helping children and adults learn about opioid addiction by News5Cleveland.

The goal is to make sure they know they can and need to reach out. “[Students think] I either can’t talk about it or I need to take it on myself,’ and we let them know that’s not possible,” said Snyder. Snyder says it’s not just another school assembly, because every actor in the performance is battling addiction to drugs or alcohol, and is in recovery themselves.”To me, we’re not talking down to the kids,” said Snyder. “We’re saying, ‘Hey, we’ve been through this and you’re not alone and you can get help.”

What do you think of the play?

Michael Botticelli, who runs the Grayken Center at Boston Medical, says fear of an employer’s response is one key reason workers don’t seek care.”We know that employers have a considerable role to play in not only providing good care but also creating a climate where employees feel freer to ask for help,” he said. Shaun Carvalho, the safety director for Shawmut Design & Construction, says rates are so high because of the physical demands of the job, so his company has “mobilized a cross-functional team to enlist the proper resources to safeguard our employees and partners, and establish support systems for anyone affected by a substance use disorder.” He spoke about how addressing the opioid crisis has affected employees at a Boston Chamber of Commerce event on Wednesday morning.

How can your workplace implement resources and show employers that they can be open and honest about their struggles with addiction?

“The Phoenix,” is a Denver-based string of fitness centers and programs for recovering drug abusers. It is spreading nationally with the help of management coaching and a multimillion-dollar investment from an arm of a donor network founded by the billionaire Koch brothers. The network is better known for seeking to advance conservative politics and policies.

Do you know someone to recommend this gym to? Is there one in your area?

New research raises the possibility that a wider group of people battling substance use disorders may benefit from a Scripps Research-developed relapse-prevention compound than previously thought. The potential medication, a modified form of the compound blebbistatin, works by breaking down methamphetamine-linked memories that can trigger craving and relapse. Studies show that encountering intense stress during that sensitive recovery period can boost relapse risk. “There is data in humans that social stress — combined with using a small amount of meth — can drive a much stronger craving for the drug,” Miller says. “We found we can recapitulate that in an animal model” – Ashley Blouin, PhD.